Its approaching the end of the season for many of our ferns so I have been doing a bit of revision, trying to familiarise with some of the local species and where they live. In the process I have been using a selection of fern identification guides, and trying to find what approach works for me.

There seems to be 2 approaches. A more traditional one used by Stace, CTW and Hutchinson that identifies ferns by family or genus, and one based on leaf structure employed by Merryweather and Poland and Clement.

Both are going to have their advantages and disadvantages but the main problem for either approach is the differences in definitions of the parts of the plant. This is highlighted by the definition of whether a leaf is pinnate or not. Male ferns are classed as 2-pinnate by Merryweather but 1-pinnate/pinnatisect by Poland and Clement. Polypody is pinnate according to Streeter but pinnatisect according to Poland and Clement while Stace says they can be both.

I understand that the degree of division is difficult to see and a destructive approach often taken to teaching the structure, in other words the leaf is taken apart starting with the smallest division (pinnule). The problem is that if the first division is not a pinnule but actually a lobe then the system is bound to cause confusion especially when compared with a different book that uses the same words to describe different parts of the plant.

The other issue for me especially with beginners guides is that they tend to take the user through all the uncommon stuff first. In Merryweather for example Bracken which is the most abundant fern in the country (if not the world) is one of the last species in the book.

So do the inherent variability yet similarity of ferns make it too difficult for them to be described in a straighforward way? 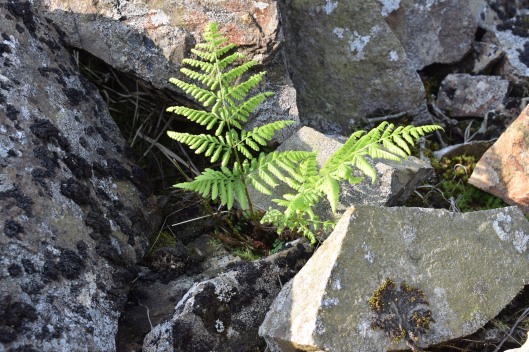 Still high up on the hill above Dare Valley Country Park, fresh growth of yet more species of fern.

This one is 3-pinnate and more or less triangular in outline with young indusia that appear curved to reniform. Merryweather (2007) works very well as the plant is clearly 3-pinnate and there is a very useful table on page 80 that draws out the salient points for each of the Buckler ferns. This one appears at first to have uniform pale scales but the ones closer to the base of the petiole do have a slightly darker stripe through the centre which identifies the fern as Broad Buckler fern Dryopteris dilitata. Hutchinson and Thomas note

‘Immature looking forms of D. dilitata exist particularly in sheep-grazed upland areas round the bases of outcropping rocks, usually less than 30cm and with scales without any dark central venation. They have often been wrongly recorded as D. carthusiana. The broad triangular outline to the frond indicates D. dilitata.'(p. 133) 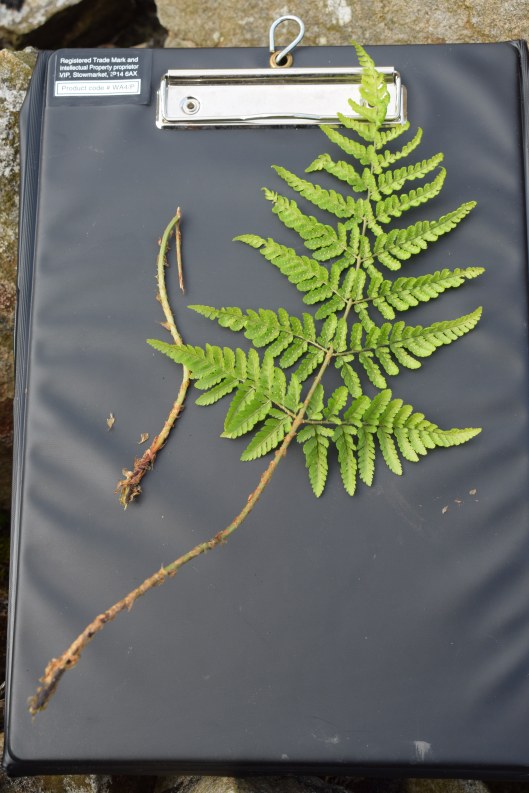 Interestingly the fern has minute stalked glands on the leaf surfaces and the mid rib and down turned leaf edges. This is in contrast to Dryopteris aemula which has upturned pinnule margins, sessile glands and dark petiole.

In order to provide comparison here is another Buckler fern, Dryopteris carthusiana. This has 3 -pinnate leaves but has uniform coloured scales and the lowest pair of pinnae are shorter than those above it. The leaves are more parallel sided than D dilitata.

Another member of the Buckler fern family. It is a male fern and lacks the dark junction to the rachis which makes it either Dryoperis filix mas or Dryopteris oreades. This one has minute glands on the stem and the edges of the indusium suggesting it is Dryopteris oreades Mountain Male Fern according to Stace (1997).

In amongst some of the scree slopes are small numbers of Polypody. These are probably going to be Polypodium vulgare or Polypodium interjectum and may require microscopic examination to confirm identification.

In comparison to the Oreopteris limbosperma in the last post these are much larger plants found alongside the streams and rivulets that run down the mountain. They stand out nicely from the Bracken at this time of year which is already turning brown. They are easily confused with male ferns which have a very similar tufted ‘shuttlecock’ habit.

Like Merryweather (2007); Averis (2013) is a book that is basically a key. Within the chapter on plants with pinnately divided leaves, the tall tufted ferns are grouped together on page 158. Rather than a key the ferns are placed together in a table. Perhaps because Oreopteris limbosperma is top of the list then its identification is very straightforward using this table. Interestingly neither Averis or Merryweather draw attention to what Stace (1997) describes as the main recognisable feature of the Thelypteridaceae (The family to which Oreopteris belongs), being the sub marginal more or less round sori on Dryopteris like leaves. (p. 21). Clapham et al (1981) are also very clear about these diagnostic features(p.10), combined with the yellow sessile glands and short leaf blade.

Another member of the Thelypteridaceae and I think one of my favourite ferns is this, Beech fern Phegopteris connectilis. This was found lower down the hill in an open wooded area next to a small stream. Averis (2013) is very useful in quickly identifying this plant with its backward pointing basal pinnae. Both Averis (2013) and Merryweather (2007) however describe the plant as 2- pinnate whereas Poland and Clement (2009), Hutchinson and Thomas (1996), Clapham et al (1981). 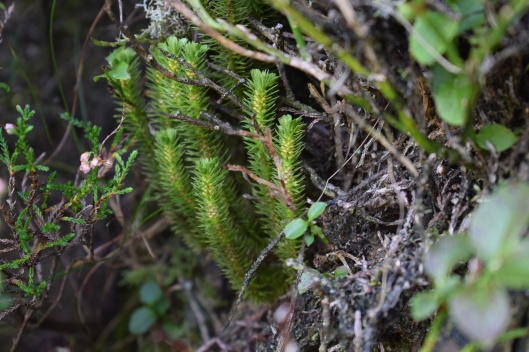 Meanwhile back up the hill and hidden among the bilberry and heather was this lone FirClubmoss, Huperzia selago.  Again Averis (2013) comes to the rescue because I don’t think many people would start looking in the fern book when coming across one of these. Averis (2013) lumps the clubmosses in with the chapter on mosses and other moss like plants. Merryweather (2007) has  a very useful section on clubmosses with detailed drawings of the leaves.

I thought I would try identifying a few ferns before the season comes to an end. I am testing out The Fern Guide by James Merryweather which I bought a couple of months ago but haven’t got around to using. The book is one of the Field Studies Council AIDGAP publications  that aims to help beginners come to grips with difficult groups of plants and animals.

The introduction to the guide is very useful in describing the scope of the book and providing tips for field identification. The book itself is a key, starting with Azolla and Pilularia through Clubmoss, Quillwort, Horsetail families to the Ferns. Each page consists of either/or questions and are illustrated with line drawings and a small distribution map of the British Isles.

I am lucky to live in a part of the country that is rich in ferns and started on the hillside above Dare Valley Country Park, near Aberdare. The first fern was this one growing below a rock outcrop.

The Key for the ferns starts on page 40 and depends on accurately determining the degree of division of the frond into pinnate, bi-pinnate, tri-pinnate etc. I decided that this plant was pinnate which put it into Key F. This was because the pinnae seemed to be deeply lobed almost to the midrib, rather than having distinct pinnules. However this proved to be the wrong choice and the plant would not key out.

When I tried to key out the fern assuming it had bi-pinnate fronds it did eventually key out but the process was quite tortuous as it involved eliminating fairly unusual plants such as Jersey Fern Anogramma leptophylla and Killarney Bristle Fern Trichomanes speciosum. I think this is quite a problem for a guide that is aimed at beginners.

The plant keyed out as Lemon Scented Fern Oreopteris limbosperma. Ironically (given the degree of technical language) Poland and Clement(2009) seems to offer a more straightforward key. Here the frond is described as 1-pinnate with pinnatisect pinnae (p.15). The greatest difficulty is identifying the hairs on the underside of the leaf which takes the key to section BD (p. 20). After this its fairly straightforward identifying the tufted habit and the numerous yellow glands.

The next fern growing just a few feet away was this Hard Fern Blechnum spicant.

Straight away there is the same problem of deciding whether it is 1-pinnate as defined by Streeter (2009) Stace (1997) and Merryweather (2007) or pinnatisect (Poland and Clement 2009). I would say my specimen was 1-pinnate and Merryweather works quite quickly but again perhaps there was no need to go via the much rarer Forked Spleenwort and Holly Fern. The identification is sealed at this point by the illustration but the description of it growing on peaty soils in a rosette form is less useful. (In this case the fern is growing on rocks which could lead us on wrongly to Polypody or Spleenwort at this point.)

The next fern was growing just below the rare and unassuming Sorbus porrigentiformis.

The kidney shaped indusia diagnose this as one of the Buckler Ferns (Dryopteris) and Merryweather offers us a choice of 5 male ferns with these lanceolate pinnae (p. 76). The dark junction of the pinnae stalk and rachis quickly takes us to the Dryopteris affinis group. Merryweather then goes on to describe the sub-species affinis, borreri and cambrensis, but I don’t think I would like to commit to any one of these.

So at this point I more or less gave up on Merryweather, because although aimed at the beginner it also provided too many options such as the D affinis group that could not really be determined. I really like the feel of the book and the colour photographs at the back are excellent. The line drawings are generally good but often lack enough detail. Most of all though the keying process was too slow and the definition of terms like pinnate unclear.