I have simplified the keys made in the earlier posts to make them more like crib notes that can be taken in the field and checked with a more detailed guide such as a flora or Averis. The species chosen are those in the NVC for the more common heathland associations in particular H10/H12 and H18 (I have added A curstsii). The keys are vegetative so they can be used throughout the year. No attempt made to separate Festuca complex or Agrostis canina/vinealis.

(N.B. Dwarf shrubs not included as they are unlikely to be found in this area are Vaccinium vitis idaea, V uliginosum, Arctostaphylos uva ursi, Cornus suecica and Juniperis communis)

Ligule shorter than wide A capillaris

(N.B. A canina/vinealis v diff to differentiate if growth form not obvious)

I think the greatest difficulty for the beginner is how this

There’s grasses and buttercups but what sort?

They all look the same!

In other words its very difficult to find a particular species (even if you know which family its in), partly because you are presented with all the members of the family on the one page. What’s not clear to the novice is that most of the plants in the family are probably quite restricted in their distribution and you don’t need to worry about them.

So when I came across this book by Averis (2013) it struck a chord.

Perhaps this will help with the confusion

The current trend is to teach people the families of plants starting with the most common. This is great up to a point, but what the beginner doesn’t have is experience of different vegetation types which could provide useful clues as to where their plant belongs. Averis attempts to put the individual plants in context and while parts of it work really well the tables can be a bit too long. 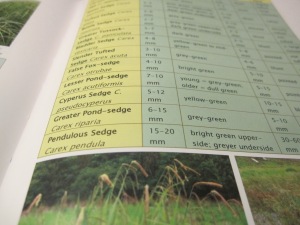 Too much info in one table?

So I think the answer for me is to merge the approach of Francis Rose (2006)(to do a vegetative key by habitat type, see p47) with Averis and to use the detailed information available on vegetation available through the National Vegetation Classification (NVC). (I look back to when I first started using keys to look at trees and shrubs and these proved useful because they restricted me to looking at a few recognisable habitats in that case, woodlands and hedgerows).

Because I live on the upland fringe of Wales I decided to start with one of the more easily identifiable vegetation types, that is heaths. These contain relatively few species so should be relatively straightforward to start with, and are well documented in the NVC. The idea is then to look at wet heaths, then acid grasslands so broadening my knowledge and recognising the context in which plants grow. I thought it better to start with a recognisable vegetation type such as a heath or a wood because something like urban wasteland or grassland would be just too daunting.

I like to think I know roughly what a heathland looks like so I started here with an area apparently dominated by dwarf heathy vegetation, in this case Calluna vulgaris and Vaccinium myrtillus. This is a dry heath (probably H12, see page 501 for the floristic table in Rodwell ed 1991 Vol 2) and the most likely dwarf shrubs, according to this NVC and The New British Plant Atlas( Preston. C.D; Pearman, D.A; Dines, T.D. 2002) are

I have a good idea from the plant atlas that Empetrum, V vitis-idaea and Arctostaphylos uva-ursi don’t grow around here but that E tetralix is fairly common in wet heaths so I’ll stick that in for good measure. C vulgaris and V myrtillus are most common so I’ve put them first.

1 Leaves less than 2mm or more than 10mm

2 Leaves greater than 2mm but less than 10mm long, leaves in whorls

[O.K it might be a bit too tied to where I live and could easily be broadened to include some of the rarer species. Grasses next!] 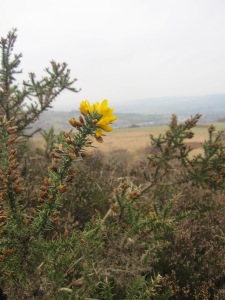 Ulex europaeus is the most readily identifiable being more robust and having larger petals and calyx. The other two are both dwarf plants but are not so easy to differentiate. Both species are fairly plastic in growth form and variable in size, and calyx length seems to be the best guide.

Stace also describes not only the calyx length but also the shape of teeth on the lower calyx lip.

Fortunately in Britain the 2 species have markedly different distributions (though this is not the case on the continent) with U gallii being more or less restricted to the Western seaboard and U minor mainly in the South East of England. However note this quote from the Plant Crib

Calyx length scarcely changes between anthesis in late summer and dehiscence of the pods in the summer following, so it a very useful character. Identifications using single measurements are likely to result in 5-10% misidentifications, whilst means of 10 measurements will almost always place a plant unambiguously. Ulex  gallii is much more frequent in the west, but does occur rarely in the east, and has been under-recorded in northern Scotland.Ulex minor is now increasingly being found outside its traditional stronghold of SE England, and could be more widespread still (Rich and Jermy)

One of the advantages of living in the South Wales valleys is the access to open land and the freedom to explore. Recently I took a wander onto the ridge below the Blorenge between Blaenavon and Abergavenny

‘The southern part of this extensive upland site is comprised of sub-montane heath with large areas of Calluna – Empetrum – Vaccinium vitis-idaea, a community which is of local distribution in South Wales.’(CCW. SSSI citation)

For much of the year the dominance of the Heather Calluna vulgaris presents a somewhat dark and bleak appearance.  However when you get up there and start exploring closely I quite quickly found an interesting collection of heathland plants.

Sketchbook with leaves of C vulgaris, some adpressed; some with noticeable auricles

Calluna vulgaris is abundant and still has the dried remnants of its flowers. The taller mature plants are typically dark in appearance but there are a number of younger plants that seem different at first sight. This is because some of the branches have leaves that are pressed close to the stem(adpressed) with undeveloped auricles while others are more splayed out with large noticeable auricles.  The small leaves are deeply folded underneath (revolute). At the base of the branching leaf stems and flower stalks may be leaves with more pronounced auricles(paired lobes at base of leaf), also revolute.

Erica tetralix with its revolute leaf and general hairy-ness

Cross-leaved heath Erica tetralix, even in December has its dead flowers grouped near the tips of the shoots. It is noticeably hairy /downy when looked at with a hand lens and the plant is grey-green in colour. It too has strongly revolute leaves,

‘In many species, of which Calluna and Erica are good examples, the leaf margins may be folded inwards, almost meeting in the mid-line. This is an effective way of regulating water loss by transpiration in hot, dry conditions. Leaves of this type are called ericoid.'(Webb p.108)

At this site E tetralix is much less common than C vulgaris and struggles to grow through the more dominant plant. 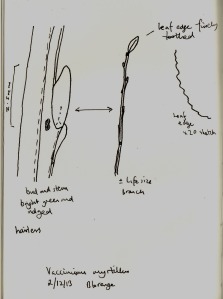 Bilberry or Whimberry Vaccinium myrtillus has more or less lost its leaves at this time of year and has hairless angled green stems, with alternate buds. Where the last of the leaves are hanging on these are finely toothed. 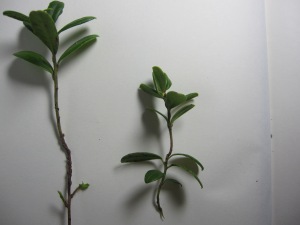 What I at first thought was A myrtillus was actually, Vaccinium vitis-idaea or Cowberry. This has evergreen leaves that are down-turned around their edges, shiny dark green on top, lighter below. It lacks the teethed edges of the V myrtillus leaf. There were still a few red berries either attached to the stems or lying on the ground beneath them.

Close up of underside of leaf of V vitis-idaea showing the downturned leaf edge and the dark hairs. 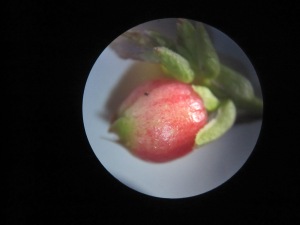 Next up was the Crowberry Empetrum nigrum, at first glance a bit like a glossy E tetralix. Some plants still had the almost black berries still attached.

Sketch and specimen of E nigrum

Like the heathers described above, E nigrum has strongly revolute leaves. The leaves appear in whorls of 4 in the one I sketched but they are described by Rose (2006) and Streeter as alternate. Stace however describes it as whorled to spiral which is more accurate. I think that they are more alternate lower down the stem but more in whorls higher up. Noticeably less downy/hairy than E tetralix. The black berries are a give away.

Despite appearances E nigrum is not one of the Heather family (Ericaceae) but it is the sole British representative of the Empetraceae. There are 2 sub species; ssp nigrum and ssp hermaphroditum. It is difficult to tell from the samples I have but as the latter has a northern distribution it is more likely to be E nigrum ssp nigrum